Shi Yongxin, originally named Liu Yingcheng, was born into a family in Yingshang, Anhui Province in 1965.

In 1981, he made his way to Songshan Shaolin Temple at age 17. There he converted to the Three Jewels and received the Dharma name Yongxin under the discipleship of Former Abbot Xingzheng.

After three years’ studies and cultivations in other Buddhist monasteries, he returned to the monastery in 1984 and assisted the abbot and the elders with daily operations at Shaolin Temple. In September, he received full ordination at Pu Zhao Monastery, Jiangxi Province. 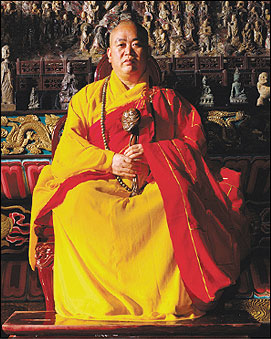 The former Abbot Xingzheng passed away in 1987. Taking the ceremonial alms-bowl and robes on his shoulder (a symbol for the Dharma transmission), Master Yongxin took over the Shaolin Temple Management Committee and started to run the monastery.

March 2003 and 2008, he was respectively elected as representative of the Tenth National People’s Congress and representative of the Eleventh National People’s Congress.February 2010, Ven. Yongxin was elected as Director of Overseas Communication Committee of Buddhist Association of China. Ven. Abbot Yongxin has been tirelessly protecting and reviving the tangible and intangible heritage of Shaolin Temple. He has done a great deal of work for Shaolin from renovating the ancient architectures to compiling and classifying classic books of Shaolin Temple, such as The Secret Book of Shaolin Kung Fu and Medicine, Shaolin Kungfu and Works of Shaolin Kungfu, Chan Dew Collections, Selected Papers on Shaolin Study, Shaolin in My Heart, etc.

To bring Shaolin culture to the worldwide Shaolin enthusiasts, he has promoted various Buddhist activities and engaged in domestic and foreign cultural exchanges. Abbot Yongxin has been contributing to the development of Shaolin Temple and spread of Shaolin culture.